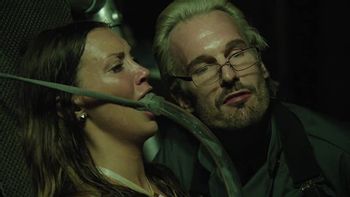 "Everyone loves a pretty doll."
"You know, I've always measured my success by counting the number of victims I've had. But now, I think I'm going to widen my scope and start counting the number of Earths I conquer instead. You want to go home? Let's go. After all, this Earth has already been brought to its knees."
— Hunter Zolomon/Zoom to Caitlin Snow, The Flash (2014), "Back To Normal"
Advertisement:

Of the many characters populating the Arrowverse, here are the most awful and atrocious, ranging from street-level drug dealers to god-level entities.

Shows are listed by first airdate. Other universes may be found at their respective pages here or here