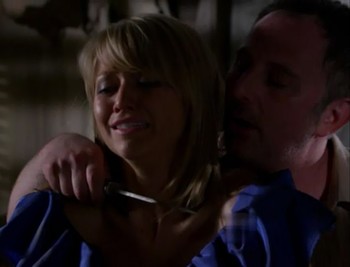 "When I was a kid, my dog, Poppy, running across the grass. When I hit her, I liked that feeling. That has not changed."
George "The Boston Reaper" Foyet: You think I'm afraid to die?
Aaron "Hotch" Hotchner: You're greedy and narcissistic. You want the recognition...the fame...like Bundy.
Foyet: I wanna be bigger than Bundy.
Hotch: Well, you can't enjoy it if you're dead.
Foyet: If you know me so well then how come so many had to die to bring you here?
Advertisement:
Hotch: That's your choice, not mine. You're the serial killer.
Foyet: That's right.
— "Omnivore"

The agents of the BAU have faced hundreds of unsubs, both recurring and ones from only a single episode; serial killers, serial rapists and others. A select few are especially vile.

Unsubs in each group are listed by first appearance.