To return to the Character page for Star Wars, go here.
Grogu ("The Child") 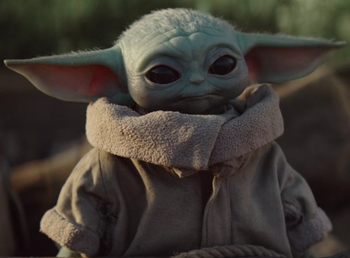 Voiced by: David Acord (some vocalizations)
Appearances: The Mandalorian
"Patu!"

A male 50+ year old Force-sensitive infant from the same species as Jedi Master Yoda. He's wanted by Moff Gideon a few years after the battle of Endor, and Mandalorian bounty hunter Din Djarin ended up taking him into his personal care instead of leaving him in the hands of Gideon's Imperial remnants. The Mandalorian thus became Grogu's surrogate father per his clan's rules so long as Grogu is not reunited to his kind or doesn't find another father figure.