Literature / Day of the Dragon 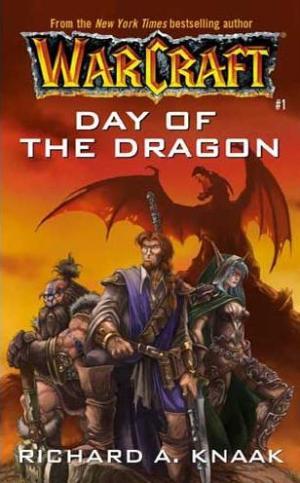 Day of the Dragon is a fantasy novel by Richard A. Knaak, and set in the Warcraft Expanded Universe. The first of Blizzard Entertainment's tie-in novels from this franchise, the story is set several months after the events of Warcraft II: Beyond the Dark Portal. As the Horde's remaining territories in Azeroth become increasingly besieged and the nation of the Alliance begin to squabble, the human mage Rhonin is sent to the heart of the Horde's operations to free one of their last remaining advantages, the imprisoned Dragonqueen Alexstraza. Of course, not everyone wants to see her freed, and Rhonin soon becomes embroiled in a conspiracy to see the Age of Dragons restored, and mortal life on Azeroth destroyed.
Advertisement:

This story is notable for defining the nature of the dragonflights and the Aspects, as well as creating three new dragonflights to add into the canon. Many of the details in this book would be touched upon in the The War of the Ancients trilogy, as well as many of the quests in World of Warcraft, particularly the Cataclysm expansion.