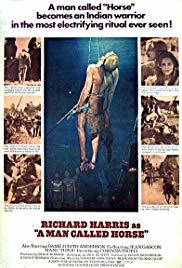 A Man Called Horse is a 1970 American Western directed by Elliot Silverstein and starring Richard Harris. English aristocrat John Morgan is captured and enslaved by a tribe of Sioux Indians, who refer to him as "Horse" and use him as a pack animal. Deciding that his best chance at freedom is to gain status within the tribe, John kills two Shoshone warriors, is accepted as a warrior himself, and sets out to become leader.
Advertisement: