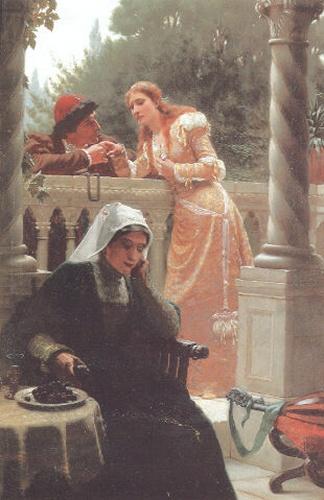 Falling asleep on the job is unwise.
Advertisement:

The duenna (or chaperone) is a Stock Character whose main purpose is to provide an obstacle to the male Love Interest. Almost always a comedy character, she is older than her charge and intent on protecting her from the debauched hordes of unmarried men who (according to the chaperone) are waiting around every corner. Said young ladies are as anxious to get rid of her as her suitors. May also be an Old Retainer.

Usually a devout older woman who may be very naive about the world, though a common variation is one who has had a very eventful life, and thus knows exactly what to expect from young men.

See also: Moral Guardians, Overprotective Dad, Maid and Maiden (the maid is chaperoning and the maiden is being chaperoned), Lady-in-Waiting.