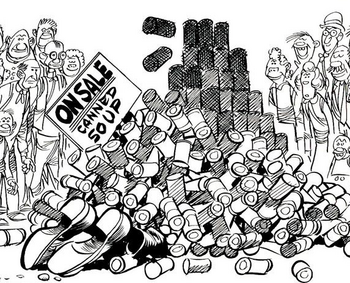 Insert canned laughter here.
Rather than the shelves that are standard practice in real life, fictional shopkeepers seem to prefer to display their wares in rickety, ceiling-high pyramids stacked in precisely the place a runaway shopping trolley is likely to crash into them.
Advertisement:

Their other major vulnerability is to someone (often an oblivious young child) taking an item from the bottom level, thus causing the rest of the pyramid to collapse spectacularly.

Some supermarkets do have displays like this, but generally they consist of non-fragile items and are held up by cardboard support structures.

A common variant is to see someone just finish compiling the large stack only to have something bad happened to it. This tends to result in an "oh man" response from the stacker.

For other things that are almost certainly likely to be destroyed when they appear, see Ashes to Crashes, Priceless Ming Vase, Exploding Fish Tanks, Doomed New Clothes.