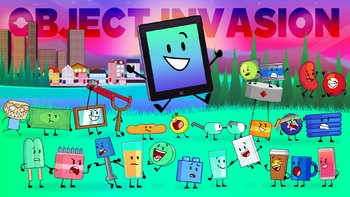 Object Invasion is an Object Show which began on Scratch on January 30, 2016, but then got rebooted and started airing on YouTube on July 2nd, 2016. It was created by FusionAnimations, who also made The Daily Object Show.

As the show's lore goes, the Earth suffered a total extinction due to mass radiation. Sometime after the catastrophe and life returns to the planet, new intelligent life arose in the form of evolved inanimate objects, which rebuilt the world to a state of normal.

Taking place in the year of 6000, the show follows iPad, an object who meets a group of 25 people who joins them in his competition show for a billion dollars as contestants. Not too early on, however, he has to deal with Mace, who swears Revenge on him for some Noodle Incident and wants to shut his show down, and must protect his contestants from him and (eventually) his mutated animal Mooks at all costs. It ran for 8 episodes before it's cancellation.

Episodes of Object Invasion can be viewed here