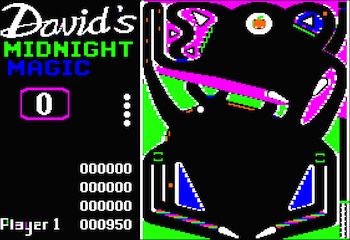 David's Midnight Magic is a computer pinball game developed by David Snider. It was released in 1982 by Brøderbund Software for the Apple ][, then later ported to the Commodore 64 and Atari 8-Bit Computers.
Advertisement:

Upon graduating from college, David Snider decided to try writing software for the Apple ][ before finding regular employment. After seeing the success of Bill Budge's Raster Blaster, Snider felt that was a game he could also develop; rather than taking his chances with an original table, he decided to copy the playfield design from Steve Ritchie's Black Knight instead. He completed the game in about eight months, signing a distribution deal with Brøderbund halfway through development. Midnight Magic was an instant hit when it was released, and some players considered it superior to Raster Blaster.

In 1986, Atari released Midnight Magic, an adaptation for the Atari 2600. Programmed by Glenn Axworthy, it bears little resemblance to the original, but is considered one of the most advanced pinball games for the console.