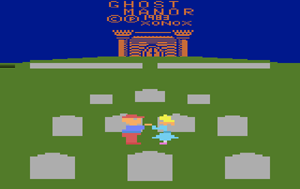 Ghost Manor was an early Survival Horror game for the Atari 2600 and VIC-20, released in 1983 by XONOX as part of their "double-ender" series of two-game cartridges.
Advertisement:

On the Atari 2600, you play either a boy rescuing a girl, or a girl rescuing a boy; you can switch between the two, even in the middle of gameplay. On the Atari 7800 and VIC-20, you can only play the girl. You have to rescue your friend from Dracula, at the top of a three-story castle.

You start outside, in a graveyard, where you collect spears from either a friendly ghost or a skeleton, depending on difficulty level. Once you have 10-25 spears (again, depending on difficulty) you advance to the castle gate. There you use your spears to shoot a bunch of spooky things (skulls, bats, scorpions, and a knight) that move back and forth across the screen, while avoiding a Mummy that's trying to kill you with an axe. Once you've shot all the spooks, you shoot the mummy, and enter the castle.

The first and second floors of the castle are mazes of walls with an Advancing Wall of Doom sliding back and forth. There are coffins scattered around, that you open by touching them with your hand. One coffin per floor has a cross inside. Find the cross, then climb the stairs to the next floor. You get a third cross when you reach the top floor.

The top floor is a Boss Room, with Dracula slowly advancing towards you, and your friend being held prisoner in one of two cells at the top of the screen. You have to maneuver until Dracula is above you, and a prison cell is above him. Then use your crosses to force Dracula up into the cell. Once Dracula is imprisoned, your friend is freed, and you guide him/her back to the stairs to escape.

Higher difficulty levels change the number of spears you get, the speed of the mummy, the moving walls, and Dracula, and whether or not you have a lamp to see your way around the mazes.