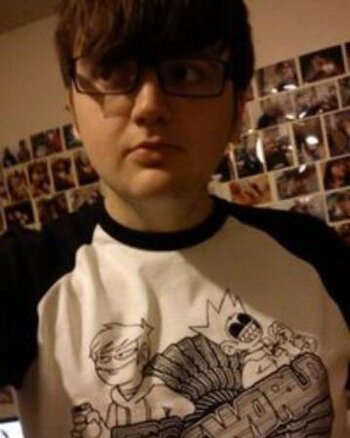 He voiced the character of Edd (based on himself) for the show starting in 2004, and met and befriended the voice actors of the show's other three lead characters either through school (Matt Hargreaves) or online (Thomas "TomSka" Ridgewell, Tord Larsson).

Edd began animating in 2002; he initially used a GIF animation program, but after the website he uploaded to no longer accepted GIFs, he switched to Macromedia Flashnote now called Adobe Animate and best known as Adobe Flash and began uploading to Newgrounds in 2003 following seven months of training in the program.

He began a professional animation career in 2008, later contributing to Tom's most popular piece of online content, asdfmovie, through animating its second installment and voicing the famous "I Like Trains" Kid character.

In April 2011, Edd revealed that he was diagnosed with acute lymphoblastic leukemia for the second time, having previously been diagnosed in 2006. He did make light of his predicament, using his illness as the basis for numerous sketches on his friends' accounts (some of them quite bleak, both at the time and looking back).

Ultimately, on March 25, 2012, at the tragically young age of 23, Edd died from a recurring infection caused by his cancer. Tom and Matt announced Edd's death in a short video released two days later, which ended with Tom stating, "Edd may be gone, but his world will keep on spinning."

Despite Edd's death, his namesake character was not retired, as his dying words were that he didn't want the series to end. With the reins of the series passed to Tom following his death, and later to Matt (who runs the show today). Edd's voice went on to being provided by Tim Hautekiet (2012-2016) and George Gould (2020 onwards), with several different animators for the eddisodes.

Following his death, Edd was cremated and Tom and Matt scattered some of his ashes atop a mountain in Hollywood in July. The majority of his ashes were buried on his birthday (28th October) in London.