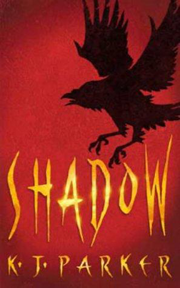 The Scavenger Trilogy by K. J. Parker is a Low Fantasy set in an empire threatened from outside by raiders and torn from within by conspiracy. We meet Poldarn, the protagonist, as he wakes alone on a body-strewn battlefield with no idea who he is. He is an innocent blank. Encounters with people who knew him lead to disaster: Poldarn aches to recover his past, but this past is ticking.
Advertisement:

The supernatural is present but low key. Even the god that may be stalking the characters is only ambiguously real. The writing is excellent and but dense in places. Rather than Viewers Are Morons, Viewers Are Expected To Be Taking Notes. Part of the complexity comes from the extensive uses of dream sequences. In his dreams Poldarn sees the past and the future, from his own eyes and those of other characters. When this verges on Anachronic Order it is challenging first time through.

Technology, the material culture of this world gets an extended look-in. Parker is interested in work as well as fighting, and makes things in Real Life and this comes through.

A very meaty series with much food for thought, but be warned: the trilogy is bloody and dark. The prose is assured, the tone is calm and the humour bitingly funny. The subject matter, however, is bleak and the treatment of it cruel. A review

made the comparison to watching a "massive road accident happening in slow motion". The bitter satire is however welded to an engaging story; the quest for Poldarn's mysterious past and the calamitous adventures he has along the way.