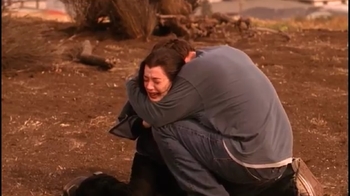 "The first day of kindergarten you cried because you broke the yellow crayon and you were too afraid to tell anyone. You've come pretty far, ending the world, not a terrific notion, but the thing is, yeah, I love you. I loved crayon-breaking Willow and I love scary veiny Willow. So if I'm going out it's here. If you wanna kill the world, well then start with me. I've earned that."
"Thanks a lot for coming. It was good of you to teleport all this way. Though, in retrospect, it probably would have been better if you hadn't come and given Willow all that magic that made her, like, ten times more powerful. That would have been a plus."
—Anya Jenkins
Advertisement:

At the Magic Box, Willow starts to recover from Giles' attack, but she is not interested in his attempts to help. He tries to keep her down, but she is persistent, attempting to invoke Asmodea, so he is forced to bind her physically and magically with his powers. Buffy and Anya hug Giles, who then offers his sympathies to Willow and then catches up with Buffy. Giles reveals that he was given power from a coven of powerful witches in England to stop Willow. Buffy admits that Willow was abusing magic before and she barely even noticed. She then tells Giles how everything has gone downhill since he left including her taking a fast-food job, Xander jilting Anya (who returned to being a vengeance demon), Dawn's shoplifting, and her sleeping with Spike. Giles's reaction is the last one she expected; he begins to laugh at the absurdity of so much bad luck. Buffy is shocked at first, but ends up descending into laughter too.

Meanwhile, Willow communicates with Anya telepathically and tells her how to end the binding spell. Buffy and Giles continue to laugh about the luck of their lives and then talk about Buffy's feelings about being alive in the world. Having heard everything that went wrong in his absence, Giles apologizes for leaving them in the first place, but Buffy insists that he was right and it was time she started acting like an adult. She admits that when he left, she still felt like she'd left an important part of herself in her grave and still doesn't know why she's back when it was apparently her time to die. Giles doesn't have a simple answer, so they return to discussing Willow and Giles explains that the coven is trying to extract Willow's powers without killing her. Willow appears in the doorway, holding an unconscious Anya, and reveals that she's free of the binding spell.

Giles once again attempts to bind Willow, but she casts a counter spell. Willow magically throws Buffy aside and sends weapons flying at Giles. He blocks them though and, with the Hammer of Govannon, sends her flying through a brick wall into the main room. Meanwhile, Xander and Dawn walk down a road with Jonathan and Andrew, talking about what to do next. Xander again rambles on that he believes how useless he is, that he's really a coward because he did nothing when Warren shot Buffy and Tara, and did nothing at the Magic Box to stop Willow. When a smug Dawn mentions that Spike would help out and not be afraid, Xander lets it slip that Spike tried to rape Buffy. Dawn does not easily accept that.

In the cave in Africa, Spike wins another round and asks for whatever else the demon can dish out. He gets it when his body is suddenly covered in beetles which begin to burrow under his skin, making him scream in pain.

In the Magic Box, which has been almost completely destroyed from the magical battle, Willow is confident in her strength and a weakened Giles tries one last attempt to hurt Willow by bringing up Tara and what her thoughts on the situation might be. Willow responds with a bolt of magic, but Buffy saves Giles from the blast, which destroys the store's upper level. Willow notes that Buffy only thinks she's saving Andrew and Jonathan when she can destroy them anytime she wants. To prove this, Willow creates a fireball that she sends off after them which will also kill Xander and Dawn, making it clear that she's doing it to get Buffy out of the store. Despite the obvious lure, Buffy rushes off to try and stop the fireball, leaving Giles to face Willow alone.

Willow lectures Giles while she slams his body repeatedly against the ceiling and the floor. He interrupts her with some magic, but she doesn't let that stop her. She sucks the power from Giles' body and revels in the overflow in her body. However, said power taps into the latent humanity still inside her; she sees all the pain in the world and, very misguidedly, decides she must end it all.

Xander, Jonathan, and Andrew try to break into crypts at the cemetery looking for a hiding place, but they're interrupted as Willow's fireball heads for them. Buffy races through the cemetery and tries to get everyone out of the way before they're hurt. After the fireball hits, Xander is knocked out, the ground shakes and opens up and Buffy and Dawn fall into a large hole. Andrew and Jonathan take the opportunity to escape and head for Mexico.

At the Magic Box, Anya finally comes to and finds a weakened, dying Giles on the ground. He can feel Willow's presence and knows that she's going to end the world. Buffy tries to climb out of the hole but struggles and tries to pull coffins out of the surrounding dirt walls to stack and try to escape on. After Xander comes to, Buffy sends him to find some rope to help them get out.

Dawn questions why Buffy didn't tell her about what Spike did and tells her sister that she can't protect her from the world. Anya appears in the hole and updates Buffy on the situation with Willow. On Kingman's Bluff, Willow raises the spire of a Satanic temple out of the ground to help her with her plans. Anya explains how Willow is going to end the world by using her powerful new-found magic to drain Earth's life energy through the effigy of Proserpexa; said energy keeps the planet intact, and with it gone, Earth will disintergrate causing the genocide of the entire human race. Nothing magical or supernatural (including Buffy) can stop her. She notes that Giles is short on time and leaves to return to him.

Xander, standing at the top of the hole, overhears this and runs off. Willow senses Buffy's desire to stop her plans, and talks to Buffy telepathically; Giles can also hear her as she speaks. Willow wants Buffy to die fighting and creates creature-like earth elements for her to battle. Buffy tries to fight the elements as best as she can and, outnumbered, Buffy asks Dawn to help.

Willow begins her magic ritual on the cliff and the earth starts to shake all over town and ground begins to blacken. Willow is feeding power into the temple when Xander arrives. Finally breaking through his spiral of self-pity and feelings of cowardice, Xander jumps in the way, disrupting the flow of life-energy. He tries to reach her humanity through their friendship, but gets tossed around and magically injured. Giles stirs and realizes that there is still hope. After one of the elements attacks her, Dawn kills one, which she credits to watching her sister in action.

On the cliff, the wounded Xander talks to Willow, and appeals to her emotions by reminding her of her past. He reminds Willow of a time in their childhood when she broke a yellow crayon and cried, worried about anybody finding out it was her, and tells her that he loves her and he'll stick by her side no matter what she does because of how much her years of friendship mean to him. She uses magic to physically wound him every time he tells her he loves her, until he finally gets through to her and her powers drain away. Willow tearfully breaks down in Xander's arms as the dark magic finally drains from her, the black veins on her disappear, and she returns to her usual red-haired appearance.

No longer on the edge of death, Giles wakes up and tells Anya that the magic he received was intended for Willow to steal. It tapped into her remaining emotions and gave Xander the chance to reach her humanity. Anya is shocked to find that Xander saved the world. Back in the crypt, the Earth-creatures disappear, and Buffy starts to cry happy tears. Dawn questions whether instead she really wanted the world to end. Buffy assures that things are going to get better and she's now really ready to live. For the second time in a year, Buffy emerges from a grave but this time she feels truly alive. She helps Dawn climb out of the hole and the sisters check out the horizon while Xander continues to comfort Willow, Jonathan and Andrew hitch a ride toward Mexico, and Anya helps Giles to his feet and out of the wreckage of the Magic Box.

In Africa, a severely bruised and bloodied Spike lies on the ground of the cave as the demon approaches him and announces that Spike has successfully endured all the required trials to grant his request. Spike rises to his knees and again asks the demon to give him what he wants so he can, "give Buffy what she deserves." The demon places his clawed hand on Spike's chest and returns the vampire's soul.