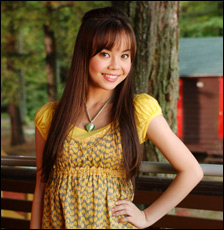 She's no Lynn Minmay, but she's the closest as you can get for a real life one.

Anna Maria Francesca Enriquez Perez de Taglé (born December 23, 1990 in San Francisco, California) is a Filipina-American actress and singer. She is known for her roles as Ashley Dewitt on Hannah Montana and Ella Pador on Camp Rock and Camp Rock 2: The Final Jam. She also played Miracle Ross on CAKE, and was in the 2009 film Fame, in which she starred as Joy Moy. She is the granddaughter of Philippine singing legend Sylvia La Torre.

Recently joined the cast of the Broadway production of Godspell.

Tropes that apply to Ms. Perez de Taglé include: