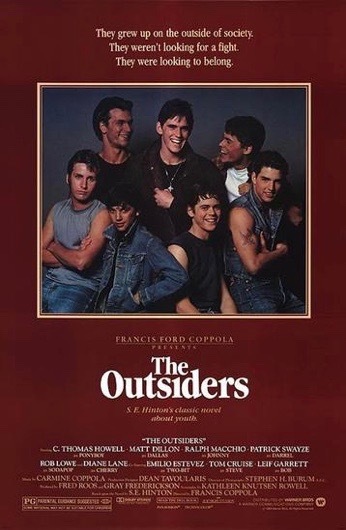 The Outsiders is a Coming of Age novel from 1967. It was written by S. E. Hinton, who was sixteen years old at the time. The story is narrated by the youngest member of a Troubled, but Cute greaser group of True Companions in Tulsa, Oklahoma.

Fourteen-year-old Ponyboy Curtis lives with his brothers Darrel and Sodapop. Darrel, who everyone calls "Darry", is the leader of a gang of boys, all in various degrees of poverty and Parental Abandonment: Steve Randle, Sodapop's best friend; the nonstop joker Two-Bit; Dallas Winston, who served his first jail sentence when he was ten; and Johnny Cade, a quiet, sweet kid from an abusive home whom everybody protects like a puppy.

The Greasers' rivals are the Socs (short for "Socials"; pronounced "Soashes"), rich "white trash with Mustangs and madras." Getting jumped and defending himself is a fact of life for Ponyboy. The trouble really starts, however, when Johnny and Ponyboy pick up two girls from the Socs' side of the tracks (Cherry Valance and Marcia) at the movies. Cherry's boyfriend, Bob, and his friends come after them later in a nearby park, which leads to an incident that has a profound impact on the Greasers.

Unexpectedly, given the genre, it is very light on the angst. The Greasers have it rough, but nobody's emo about it.

The Outsiders was followed by several sequels, of which Rumble Fish is the best known, and, of course, a rather faithful 1983 film adaptation in which Hinton herself was directly involved, directed by Francis Ford Coppola and featuring a cast including C. Thomas Howell, Matt Dillon, Ralph Macchio, Patrick Swayze, Rob Lowe, Diane Lane, Emilio Estevez, Tom Cruise, and Leif Garrett. (Not to mention some awesome music.)

The film got its own sequel in 1990, which also served as the pilot episode to a short-lived, little known TV series.

What kind of world is it where all I have to be proud of is a reputation for being a hood, and a greasy hair? I don't want to be a hood, but even if I don't steal things and mug people and get boozed up, I'm marked lousy. Why should I be proud of it? Why should I even pretend to be proud of it?
He was tougher than the rest of us - tougher, colder, meaner. The shade of difference that separates a greaser from a hood wasn't present in Dally. He was as wild as the boys in the downtown outfits, like Tim Shepard's gang.
I thought of Soda and Steve. What if one of them saw the other killed? Would that make them stop fighting? No, I thought, maybe it would make Soda stop, but not Steve. He'd go on hating and fighting. Maybe that was what Bob would have done if it had been Randy instead of him.
Darry has never really gotten over not going to college.
Darry didn't deserve to work like an old man when he was only twenty [...] But we just didn't have the money for him to go to college, even with the athletic scholarship he won. And now he didn't have time between jobs to even think about college.
Sodapop: He could have stuck you in a home somewhere and worked his way through college. Ponyboy, I'm telling you the truth. I dropped out because I'm dumb. I really did try in school, but you saw my grades. Look, I'm happy working in a gas station with cars. You'd never be happy doing something like that.
Ponyboy: That's why he's better than the rest of us. He's going somewhere. And I was going to be like him. I wasn't going to live in a lousy neighborhood all my life.
Sixteen years on the streets and you can learn a lot. But all the wrong things, not the things you want to learn. Sixteen years on the streets and you see a lot. But all the wrong sights, not the sights you want to see.