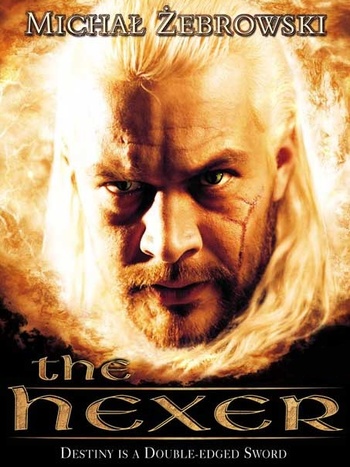 The Hexer (Polish: Wiedźmin) is the international title of both a movie and a television series loosely based on selected short stories taken from The Last Wish and Sword of Destiny from the series known as The Witcher by Andrzej Sapkowski. Both the movie and the television series were directed by Marek Brodzkinote an experienced and competent filmmaker who worked earlier as an assistant director on Spielberg's Schindler's List and written by Michał Szczerbic.
Advertisement:

Starring Michał Żebrowski as Geralt of Rivia and Grażyna Wolszczak as Yennefer, the movie was the most anticipated film for many fantasy fans in Poland, despite spawning heated controversies during production (including, among other things, the casting of actors). So what has gone wrong?

Well, the biggest problem being the movie wasn’t actually a movie. It was essentially a Compilation Movie of then-unreleased TV series. Thirteen nearly hour-long episodes had been compressed into a two-hour feature film, which in result made it into a nonsensical mess. Released in 2001, The Hexer received very poor reviews from both fans and critics.

Director Marek Brodzki released the TV series one year later, in 2002, showing a finished product that was vastly more coherent than the confusing film version. Nevertheless, the series was still considered a failure mostly due to the film's already bad reputation and due to vast changes to the original books.

On the other hand, there were some voices who claimed that given the Troubled Production (including the author's attitude) and relatively slight budget the final result was not so bad. Others praised the music and impressive fight scenes, choreographed by Jacek Wysocki - Polish master of aikido.

Much like in the books, the series' plot follows the story of Geralt, a traveling monster hunter for hire. Additionally, the series contains exclusive Origins Episodes (which were invented by the show's creators and not written by Sapkowski) depicting Geralt's childhood and training years in Kaer Morhen.

Due to the special nature of this show, this trope page focuses mainly on various alterations and original additions that were made to the source material.

The Hexer contains examples of: