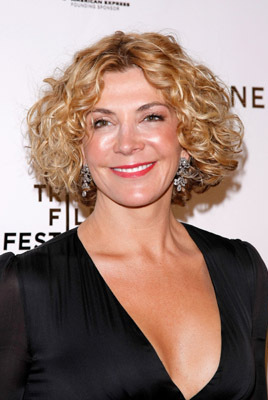 "What my father especially taught me was to not always take the safe road, the easy road. If you are going to do good work, you have to risk failing badly."
Advertisement:

A member of the Redgrave family, she was the daughter of actor Vanessa Redgrave and director/producer Tony Richardson, the sister of actor Joely Richardson, the cousin of actress Jemma Redgrave, and the granddaughter of Sir Michael Redgrave and Rachel Kempson. Early in her career, she portrayed Mary Shelley in Ken Russell's Gothic, and Patty Hearst in the eponymous 1988 film directed by Paul Schrader, and later received critical acclaim and a Theatre World Award for her Broadway debut in the 1993 revival of Anna Christie.

Her first marriage to filmmaker Robert Fox ended in divorce in 1992. In 1994, she married fellow actor Liam Neeson, whom she had met when the two appeared in Anna Christie. The couple had two sons, Micheál and Daniel. Richardson's father died of AIDS-related causes in 1991. She helped raise millions of dollars in the fight against AIDS through the charity amfAR, the American Foundation for AIDS Research.

She died on 18 March 2009 from an epidural hematoma after a skiing accident in Quebec, Canada.