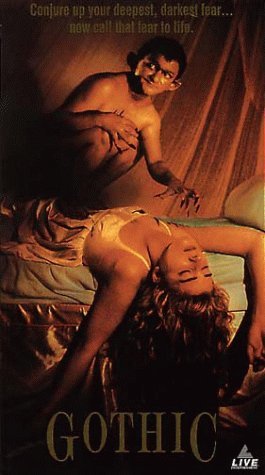 It's been well documented that Mary Shelley (Natasha Richardson) visited Lord Byron (Gabriel Byrne) and his biographer Dr. Polidori (Timothy Spall) in Geneva with her husband and stepsister during the stormy summer of 1816, was challenged to write a ghost story, got the idea of Frankenstein from a nightmare and began a short story which eventually became a novel.

Ken Russell takes that and runs with it, there's a seance and a reading of a pornographic ghost story. Percy Shelley (Julian Sands) prances about naked on the roof during a thunderstorm, Byron has a robot stripper in his bedroom and there's stuff with leeches. If it's possible for an entire film to be a Big-Lipped Alligator Moment, this is one.