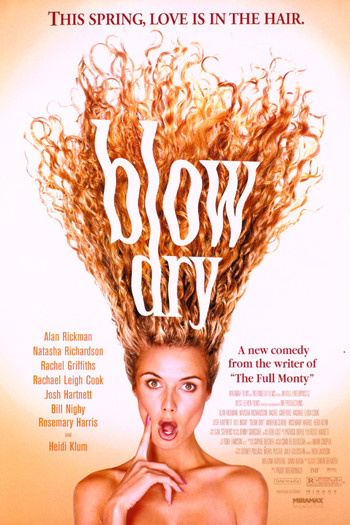 Blow Dry is a 2001 British comedy film written by Simon Beaufoy (The Full Monty) and directed by Paddy Breathnach.

The British Haircutting Championship will be held in the small Northern town of Keighley in 1999. The mayor is proud of this, but at first no one else in town seems to care...

As it happens, this town is home to not one but two of the greatest hairstylists in Britain. Phil (Alan Rickman) is running a basic barbershop with his teenage son Brian (Josh Hartnett); he left the competition circuit ten years ago and says he was in it ten years too long. The other is Phil's ex-wife Shelley (Natasha Richardson), who left him for his model Sandra (Rachel Griffiths). They are running another salon called A Cut Above. Phil and Shelley have been divorced for ten years...

Meanwhile, the hotels are filling up. Teams from across Britain are piling in one by one with their impractically finacy models and styles. One team in particular is led by the Obviously Evil Raymond Robertson (Bill Nighy), an old rival of Phil's. His model, Christina (Rachael Leigh Cook), is also his estranged daughter visiting from America. She is a sweet girl with delusions of being a colorist.

The mayor of Keighley realizes abruptly that, while the town is hosting the national championship for Hairstyling, and while it is home for one of Britain's greatest hairstylists ever, there is no local team. The ex wants to enter because she has terminal cancer (though she divulges that on a strictly need-to-know basis) and might not get another chance; but Phil refuses. At first, his son also declines, since he will be fired if he enters; but then he learns Christina is competing, and so he changes his mind. A Cut Above has a team just before the entry deadline.

What follows is a surprisingly exciting and bloodthirsty hairstyling competition, with some heartwarming moments.