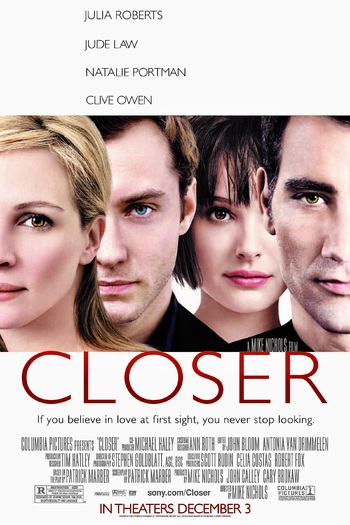 "Have you ever seen the human heart? It looks like a fist, soaked in blood."
— Dan
Advertisement:

Closer is a 2004 American drama film based on the 1997 play of the same name by English playwright Patrick Marber, directed by Mike Nichols and starring Julia Roberts, Jude Law, Natalie Portman, and Clive Owen.

Basically, it's a romantic drama set in contemporary London, about two opposing sets of couples—Dan Woolf (Law) and Alice Ayres (Portman), and Larry Gray (Owen) and Anna Cameron (Roberts)—and their various betrayals, infidelities and heartbreaks in a classic love square. It's much better than it sounds, although its most well-known scene is arguably the one where Alice is working at a strip club.

Owen and Portman were nominated for Academy Awards and won Golden Globe Awards for their performances, with Owen also snagging a BAFTA Award.