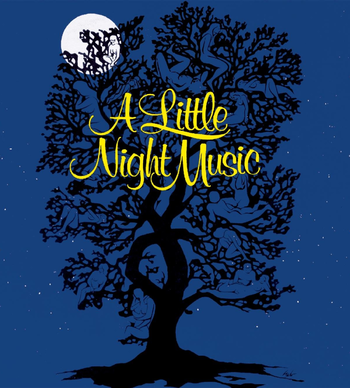 A Little Night Music is a 1973 musical with music and lyrics by Stephen Sondheim and book by Hugh Wheeler, based on the Ingmar Bergman film Smiles of a Summer Night.

The score is notable for having been written almost entirely in waltz time (3/4) or multiples thereof (only 11 bars of underscoring and the Cut Song "Two Fairy Tales" are in Common Time), and for featuring Sondheim's only major pop hit, "Send in the Clowns." The show was a hit, and is considered one of Sondheim's greatest works (it's also one of the lightest and most accessible, Forum and Into the Woods aside, which makes it a great introduction for nascent Sondheim fans). It concerns a series of interconnected Love Triangles, which end up resolving themselves on a summer's night.

The plot, set in Sweden around 1900, is centered around a rekindled romance between just-barely-fading starlet Desirée Armfeldt and newly re-married lawyer Fredrik Egerman. Fredrik is married to a much younger woman, Anne, who is the subject of his son Henrik's adoration; Desirée is having an affair with a married dragoon, Carl-Magnus, whose wife Charlotte knows Anne through her younger sister. Eventually they all end up at Desirée's mother's house in the country. Hilarity (among other things) Ensues.

There have been numerous revival productions over the years in both New York and London. Adapted into a 1977 film, directed by Harold Prince and starring Elizabeth Taylor as Desirée. The stage show was filmed for TV at Lincoln Center

Not to be confused with the Mozart composition