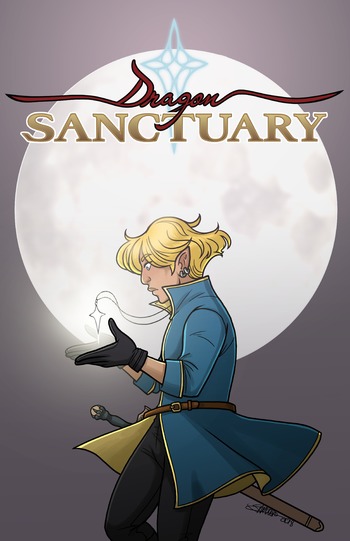 Dean: How can you tell if someone's The Kiata and not just a Kiata?
Merno: Like it said. Born beneath a full moon with a silver light and golden hair.
Dean: So you seriously leave the safety of the world up to a nursery rhyme?
Merno: Kid, I get how this sounds, but some respect. You're here because someone died. Because they all died.
Advertisement:

is a fantasy webcomic created by artist, Archer character designer, and podcaster Shannon Manor in 2018.

In the world of the Pearl, it is well known that the Kiata family are the only chance life has against the demons. Blessed by the Moon and charged with convincing the Dragons that they mean no harm, they fight back against the shadow Ghalena, her monsters, and the cultists who worship her...or at least they did until tragedy struck and those same zealots decided the best way to stop The Kiata was to simply kill them all.

Fortunately, The Chosen One had been hidden away as a child and was never found. Instead, young Dean grew up in a secluded village away from all violence, darkness, or anything remotely interesting. His half-fae heritage leads him to yearn for adventure and be shunned by the rest of the village. One day he convinces his bold sister Meale to join him in sneaking off to the capital city to celebrate the coming eclipse—a choice that leads him to learn of his family and destiny, and become embroiled in the growing forces of Ghalena. Fortunately he's backed by his uncle Merno, the unchosen Kiata and alcoholic lieutenant of the Slayers, and elven Princess Nima, who herself is seen as a burden on her family for her half-human heritage.

The comic takes a close look at the realistic ramifications of being part of a chosen bloodline, from political to familial. The series is mostly fun and violence is not often or constant, but it is intense when it happens. The website also has extensive information on the setting, the various races inhabiting it, and their nobility (though information on them may contain spoilers, and as such any major events or implications drawn from them will be in spoiler tags).