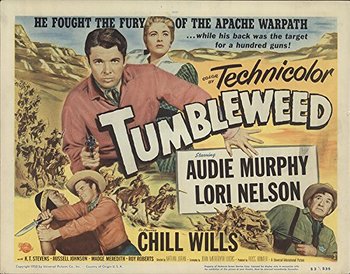 Jim Harvey is a guide and guard on a wagon train. After he saves the life of a Yaqui Indian warrior, Tigre, the wagon train is attacked and Harvey realises their only chance of survival is if he can negotiate a truce with Tigre's father, the chief Aguila. Aguila orders Harvey to be knocked out, and tortured later, but he is set free by Tigre's mother. He goes to town and discovers the people on the wagon train were massacred, except for two sisters who Harvey insisted hide in the caves. Harvey is falsely accused of cowardice and the townsfolk threaten to lynch him. Harvey escapes on a borrowed horse named Tumbleweed, and tries to prove his innocence, discovering that a white man was responsible for the attack. It is the horse's intelligence and instinct that save Harvey, and Murphy's interaction with the horse, that drive much of the storyline.