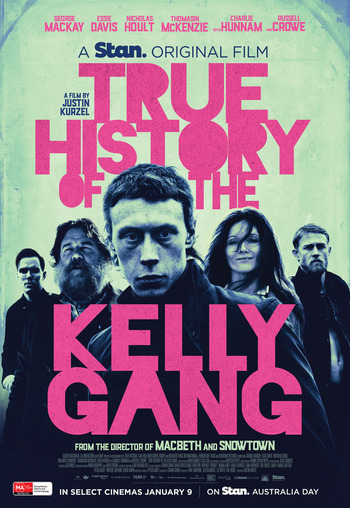 "Don't leave your story for the English to tell, they'll only fuck it up and steal the proceeds."
Advertisement:

True History of the Kelly Gang is Justin Kurzel's 2019 biographical western film adaptation of Peter Carey's seminal 2000 novel of the same name. It stars George MacKay (as a young man) and newcomer Orlando Schwerdt (as a boy) in the title role, along with (Kurzel's wife) Essie Davis as Ned's mother Ellen, Nicholas Hoult as the antagonistic Constable Alex Fitzpatrick, Thomasin McKenzie as Ned's love interest Mary Hearn, Sean Keenan as Ned's lieutenant and best friend Joe Byrne, Earl Cave (son of musician Nick Cave) as Ned's brother Dan, Louis Hewison as Kelly Gang member Steve Hart, Charlie Hunnam as Sergeant O'Neill, and Russell Crowe as Ned's bushranger mentor Harry Power.It premiered on 11 September, 2019, at the Toronto International Film Festival and was released in Australian cinemas on 9 January, 2020, before being released as an 'Original' film on Australian streaming service Stan. It is set to be released in UK cinemas on 28 February, 2020, by Picturehouse Entertainment and in US cinemas on 24 April, 2020 by IFC.