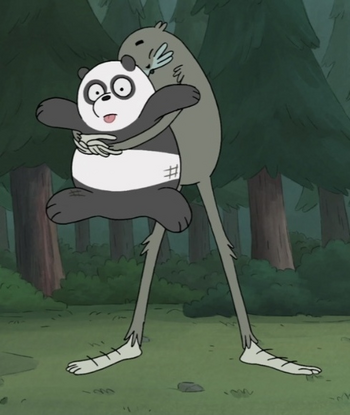 Not so abominable.
Bigfoot: We go everywhere together, I even come to school,
Moon: All those nonbelievers now think I'm really cool.
— The Great North
Advertisement:

Depending on how supernatural their preexisting lore is, most portrayals of cryptids or other creatures of folklore usually portray them as wild animals at best, malevolent beings at worst. Lake monsters are seen as terrifying denizens of the depths, surfacing only to attack unwary victims. The Chupacabra is a blood-sucking vampire beast. Other cryptids have equally monstrous portrayals, both in their traditional lore and in fiction.

The one exception to this trend, for some reason, is Bigfoot/Sasquatch, who is very frequently portrayed as being the Token Good Teammate of the cryptid ensemble. Bigfoot might befriend lost and injured people in the woods and guide them to civilization, fight against the evil poachers destroying their land, or even actively converse with humans. If a story features multiple cryptids or monsters, Bigfoot has a tendency to be portrayed as one of the least hostile of them.

In many cases, such a Bigfoot is usually the last of their kind, making them even more of a sympathetic figure. Part of this may be due to the resemblance of Bigfoot to a bipedal gorilla; as gorillas have received a great PR boost in recent decades with more research into their societies, it stands to reason that a Gentle Giant Bigfoot might seem more true-to-life than a dangerous, homicidal one.

Still, this isn't to say benevolent Bigfoot are always helpless. If the story features an actual antagonist, expect the big ape to help save the day by putting that power and brawn to use saving their protagonist friends and stopping the villain in a Big Damn Heroes finale.

Note that this depiction less commonly extends to the Yeti/Abominable Snowman, who is still often portrayed as a fierce, dangerous creature of the frozen wastes; exceptions are still quite common though, especially in recent years.

A Sub-Trope of Bigfoot, Sasquatch, and Yeti and Silly Simian.