Film / The Place Beyond the Pines 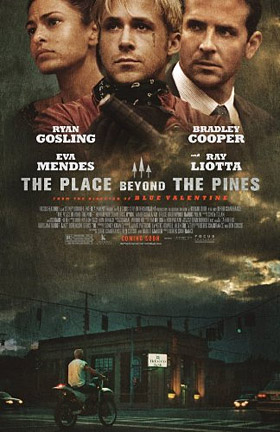 The Place Beyond the Pines is a 2013 crime drama directed by Derek Cianfrance. Ryan Gosling plays Luke Glanton, a motorcycle stunt driver in Upstate New York who gives up his carefree life on the state fair circuit after finding out that he fathered a child with a one-night-stand (Eva Mendes). Unfortunately, the child's mother has moved on and started a new relationship, and Luke's desire to become a part of his child's life, and provide financially for him, leads to him embarking on a life of crime, robbing banks and escaping via his motorcycle.

Unfortunately for him, a rookie cop named Avery Cross (played by Bradley Cooper) shoots and kills Luke after Luke makes one last heist without his partner/mentor. The film then switches protagonists, as we follow Avery Cross as he struggles with the guilt of killing a fellow young father and the wholesale corruption of his local police department. Avery ultimately decides to burn his bridges with the department, exposing his corrupt colleagues and launching a new career for himself, as he becomes a prosecutor for the local DA's office.

It's at this point that the film AGAIN switches protagonists as move ahead about 16 years, as the film now focuses upon Avery Cross and Luke Glanton's children. Avery has divorced his wife and shunned his son, in order to focus on his career, campaigning for Attorney General of New York. Unfortunately, his son AJ has begun to rebel and do drugs, forcing Avery's dad to take him in hopes that he can keep his son out of trouble. AJ befriends Jason, Luke's son who like his dad is a motorcyclist and deeply resentful of his mom and stepdad, who have kept Jason utterly clueless about his biological father's identity. When the truth about their fathers is revealed to Jason, Avery must save his son and stop Jason from self-destructing like his dad did.