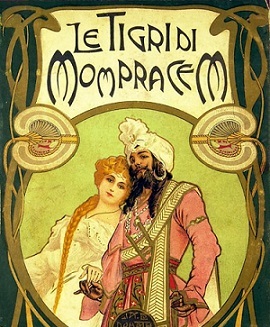 Sandokan is the eponymous protagonist of a series of adventure novels by Italian writer Emilio Salgari, published between 1895 and 1913. Set in and around the Indian Ocean, the novels tell Sandokan's story, starting from his pirate career to avenge his father, a Bornean rajah killed by a white man in the employ of the East India Company. Alongside him we find Yanez de Gomera (the only white man of Sandokan's pirate gang and his second in command), Tremal Naik (a former professional tiger hunter fighting the Thuggee cult), Kammamuri (Tremal Naik's servant), and Sambigliong (the most important of the pirates after Sandokan and Yanez).The novels still enjoy great popularity in Italy, and there are various animated and live action movies and series inspired to it (plus a great number of novels written by other authors).