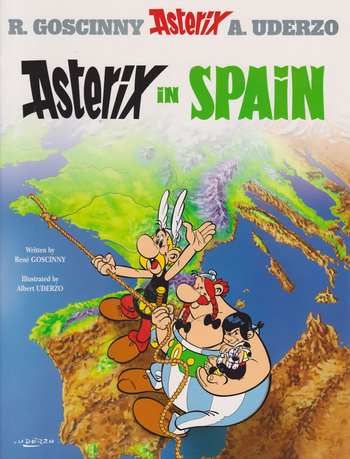 For the fourteenth Asterix album, Goscinny and Uderzo's satirical eyes turn to France's neighbours South of the Pyrenees mountains.
Advertisement:

A year after defeating Pompey's supporters at Thapsus, Julius Caesar has swept up the remnants at Munda (Montilla today), putting all of Hispania under Roman control. However, one village continues to resist the Romans. Having seen this sort of thing before, Caesar decides to investigate this village personally. Nearing it, he's confronted by an Iberian boy claiming to be the son of the village's chief, Huevos y Bacon. Caesar has the boy captured, and tells Bacon that his heir will be safe as long as there's no more trouble. Unhappy, Bacon consoles himself with the knowledge that the Romans will have their hands full keeping his son in line. Caesar decides that the chief's son needs to be taken out of Hispania, and has him sent to a garrison in Gaul - Totorum, to be exact.

Sure enough, the hostage proves to be quite a handful, especially for the transfer's head, Spurius Brontosaurus. The little brat makes outrageous demands, and holds his breath if he doesn't get it. Since Brontosaurus is under orders to keep the hostage well (and asphyxiation does the opposite) he has no choice but to comply. At the forest near the village of indomitable Gauls, the Legionary squad bumps into Asterix and Obelix, who are out hunting boars. One thumping later they have rescued the hostage, who explains his situation and gives his name, Pepe (short for Pericles - there are Greek ancestors in the family line). Brontosaurus tries to retrieve Pepe with help from the Legionaries of Totorum, but that does no good. Ultimately, Brontosaurus decides that it doesn't matter who takes care of Pepe - so long as he stays in Gaul. Totorum will watch over the village, and the Gauls can have the displeasure of caring for Pepe. With that, Brontosaurus returns to Hispania.

Pepe shows himself to be as bad a guest as he is a hostage; he refuses to eat the boar Asterix has prepared for him and demands fish instead, but changes his mind eats his own boar and Obelix's boar while the latter visits Unhygienix; an unsuccessful attempt to return the fish causes the series' first fish fight. Asterix tries to punish the brat by letting Cacofonix sing bedtime lullabies, but the Iberian child actually likes the bard's voice as it reminds him of home - especially the goats. One night of this is enough to convince the Gauls that it's their moral duty to return Pepe home. After shaking down the Legionaries keeping watch for directions to Pepe's village, Asterix, Obelix, Pepe (and Dogmatix, whom Pepe smuggled along) depart by sea on Unhygienix's boat for the Gaul-Hispania border. The Legionaries, for their part, choose not to say anything as they don't want their commanders to get upset.

After crossing the mountains along the border to avoid Roman patrols, the group stops by a restaurant in Pompaelo (now called Pamplona) for dinner. It just so happens that Brontosaurus is also having a meal there, and he has a panic attack when he sees that the hostage he was in charge of somehow made his way back to Hispania. Buying an Iberian's clothes and hay cart, Brontosaurus follows Asterix's crew, who have also bought a cart. The heroes stop by a camp of Nomads for the night, where Brontosaurus attempts to kidnap Pepe. A howl from Dogmatix gets the Nomads dancing again, spoiling the attempt.

The next morning, Asterix's cart breaks a wheel, and Brontosaurus, giving his name as Oloroso El Fiasco, lets them ride in his cart, hoping for a chance to grab Pepe when the Gauls aren't looking. But that chance never comes, and by the time they reach Hispalis (called Seville today), just north of Pepe's village, Brontosaurus is feeling desperate. As the group stops at an inn for the night (Asterix and Brontosaurus in one room, Obelix, Pepe and Dogmatix in another), Brontosaurus attempts to steal Asterix's gourd of Magic Potion while the Gaul sleeps. His theft is spoiled by Obelix's loud reaction to another of Pepe's demands, and the Roman flees into the street, causing him and Asterix to be arrested by a Legionary patrol. At the commander-in-chief's office, Brontosaurus explains the situation, and the C-In-C has some Romans check out the inn. But Obelix and Pepe aren't there, and Huevos y Bacon's village will be besieged.

Asterix and Brontosaurus are sent to the circus of Hispalis, where they learn that instead of lions, the Hispanian circus uses aurochs. A Roman noblewoman drops her red cloak into the arena, and Asterix's attempts to keep it from being dirtied ironically causes the aurochs to crash into a wall, defeating it. The noblewoman, who happens to be Caesar's half-sister of a cousin by marriage, requests that Asterix be pardoned, who requests, and gets, a pardon for Brontosaurus. Though he's drummed out of the Legion, Brontosaurus decides to become an 'aurochero' (not, an annotation remarks, 'aurocheador') in the arena.

Asterix arrives at Pepe's village, where a siege is happening. Obelix took Pepe there after Asterix got arrested, but the large Gaul powers through the siege to greet his friend, and powers back to take him into the village. The Romans decide to change tactics and build fortified camps around the village. Huevos y Bacon thanks the Gauls for returning his son. With a tearful farewell on Pepe, Obelix, and Dogmatix's part, the Gauls return for home. At the Gaulish village's celebratory banquet, Obelix shows off the singing and dancing he learned from the Nomads, much to the amusement of the Bound and Gagged Cacofonix and irritation of Fulliautomatix.

Note: The first appearance of Unhygienix and his wife Bacteria, as well as the first major fight between the villagers.