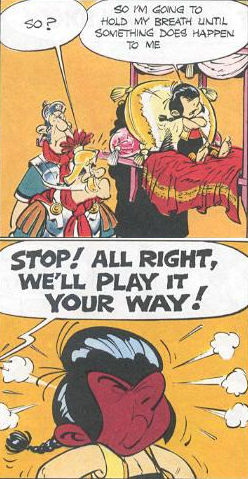 That only took three panels.

A popular form of taking yourself hostage for many a Spoiled Brat or Bratty Half-Pint (or occasionally, a childish adult) who is denied something he/she wants. Simply hold your breath and threaten to continue doing so until either the person you're dealing with gives in to your demands, or you pass out (or worse) from asphyxiation.note Worse isn't going to happen unless you fall face first into water, or with something obstructing your breath, since breathing is only a semi-voluntary reflex, which will automatically come back when you go unconscious barring as before external circumstances..

Expect the person doing this to start trembling and their face turning red or blue as they keep holding their breath, while the person it is used against gradually goes from dismissing the tactic to realizing it's no joke, and either finally giving in just in time, or allow the kid to pass out.