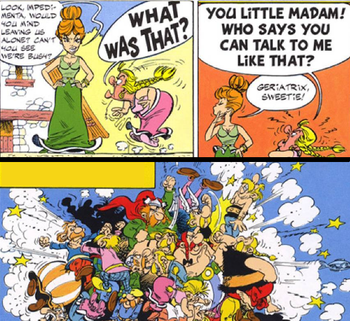 Top: how this argument started. Bottom: what it escalated into
The heroes entered the classical old pub, saloon, or roadside bar, probably looking to relax. Normally, a particularly nasty guy taunts one of the characters and tries to hit him. Sometimes it connects. Other times, the hero is able to duck, and the other guy hits a bigger, nastier guy who proceeds to toss him against a table, causing the people sat at that table to react, and soon enough three quarters of the customers are tangled in a chaotic battle, throwing chairs, bottles, and tables and resorting to dirty fights. You get the picture.
Advertisement:

This trope tends to be quite common and is often paired with Bar Brawl with some exceptions. The focus point is that it starts as a duel and ends up growing and dragging along other characters, like an avalanche. In westerns this tends to be quite common. Especially funny if the participants just start fighting each other for the hell of it, even if they have no grudges against each other. Sometimes even if they are friends!