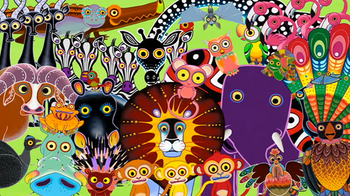 Tinga Tinga Tales is a 2010 Kenyan/British 52-episode children's series based on African folk tales and aimed at the preschool demographic.

It was commissioned by The BBC for its CBeebies channel, and by Disney Channel for its Disney Junior block. Named after the Tingatinga art from Tanzania, it was made in Kenya by a studio of about 50 people.