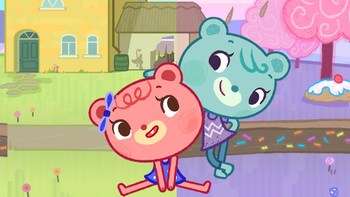 "I'm Tish, and I live here with my family!"
"IT'S RAINING CHOCOLAAAAAAATE!!!!!!"
"This is Tash. She's not real."
"It doesn't matter!"
"IT DOESN'T MATTER!"
"Tish Tash!"
—The show's Opening Narration
Advertisement:

Tish Tash is an animated Preschool Show that was developed by ChangHwan Shin, and produced by Studio Gale, August Media Holdings, Karrot Animation, and ASI Studios.

The series follows the adventures of a young pink bear called Tish, her family, and her larger-than-life blue Imaginary Friend Tash, as they learn about the world around them. No matter what troubles they face — be it surviving long, boring car trips or helping Tish's baby brother not to be too sad about losing his favourite toy — these special friends can create new worlds around themselves, embarking on fun adventures.

The series premiered with a Korean dub (titled "티시태시") on EBS1 on September 28, 2020, and all 52 episodes have aired by December 22. Each episode is 5 minutes long, but is usually paired with another segment to make a Two Shorts format. An English version airs in the UK on BBC's preschool channel, Cbeebies. An English episode was uploaded to YouTube one day before the Korean premiere, but it has since been taken down.