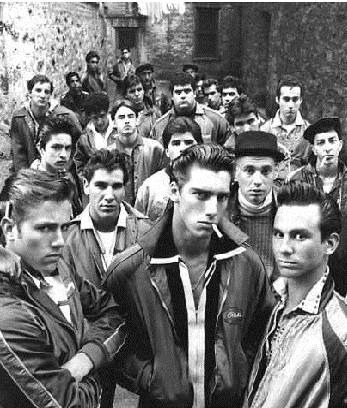 The Wanderers is a 1979 American comedy-drama film, directed by Philip Kaufman and adapted from a novel of the same name by Richard Price, centering on the members of a Bronx youth gang in 1963, and their interactions with other local gangs.

When a high school teacher accidentally sparks a race war between the Italian gang the Wanderers and the Black gang the Del-Bombers, the Wanderers—looking to gather allies for their fight to augument their smaller numbers—are rejected (humiliatingly) by the Fordham Baldies and by the Chinese Wongs. But they do get a new member with the arrival of bulky Perry LaGuardia, a newcomer to the neighborhood who proves himself in a fight. Just as things look bleak for the gang, the local mafia hoods led by "Chubby" Galasso intervene and negotiate to replace the rumble with a football game.

Features the examples of: