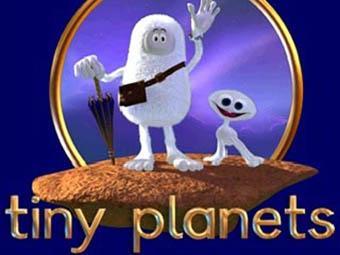 Each five-minute episode begins with Bing and Bong getting onto their sofa, which is then launched by an elaborate Clockpunk-ish catapult into space towards one of six neighboring planets. (The sofa is fitted with seatbelts, a steering wheel and headlights, and a tow cable that stretches back to an anchor point on their home planet.) At the end of each episode, they get back on the sofa and are towed home, where they brush their teethnote Well, Bong does; Bing has No Mouth. and go to bed.

Bing and Bong, and the various characters they meet in their travels, are Speaking Simlish; the only intelligible words in each episode are in the Expository Theme Tune.

The series aired on CITV in the UK and Noggin in the US. For the Noggin airings, a didactic narrator was added.