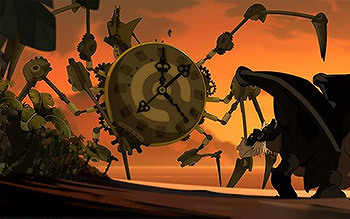 Gears can do so much more than power simple clocks!
"Clockworks click and they clink within
Locks and riddles of rings will spin
Cogwheels linking the springs and pins
The walls are closing in"
— Miracle of Sound, "Clockworks"
Advertisement:

A Setting Trope similar to and perhaps derivative of Steampunk, involving lots of artsy clockwork mechanica.

This style of Speculative Fiction seems to have arisen in the wake of Steampunk (as a recognized phenomenon, at least; one can find a fair number of older clockpunk-like fictions). If that genre could be built on a lot of steam-powered technology and Victorian fashions and images, why not look a little further back, to the era that invented more basic technologies and had its own style? Hence, in Clockpunk stories, gears and simple machines predominate, and feature in both heavy machinery and portable devices. The visual style draws on the Renaissance and Baroque eras, so mechanisms and casings will typically be adorned with intricate decorations and carvings, making some very beautiful-looking machinery if it's done right.

As the basic technology predates steam, clockpunk devices need another source of power. Wind or water mills can fit, but clockpunk machines may literally have to be wound with a key. Science-savvy audiences may note that the amount of energy stored in a clockpunk device often seems far greater than the amount of energy it takes to rewind them. Given such practical problems, writers who don't want to just Hand Wave things may resort to more fantastical power sources, such as gunpowder — or, very often, Functional Magic or Alchemy. Fascinatingly enough, the latter fits the Renaissance/Baroque style of the genre very well; this was the last era of European history when serious scientists could study such things without losing all credibility. Clockpunk settings may mix their Renaissance/Baroque feel with lighthearted fantasy; due to Fantasy Gun Control, mixing Clockpunk tech with Functional Magic is less of a strain on Willing Suspension of Disbelief than more advanced technologies.