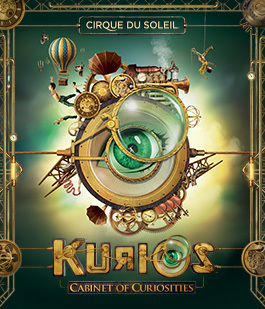 Kurios: Cabinet des Curiosites (in English: Cabinet of Curiosities) is Cirque du Soleil's 34th production. It premiered in 2014, the year of their thirtieth anniversary.
Advertisement:

It tells the story of an inventor who finds his way into a strange new world where the laws of physics don't work the same way they do here. This is the Excuse Plot for a show full of incredible acrobatic stunts, funny moments, and straight-up weirdness.