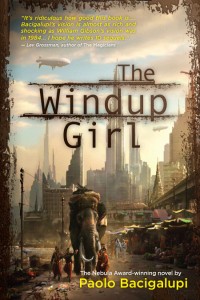 The Windup Girl is a 2009 Bio Punk science fiction novel by Paolo Bacigalupi (pronounced BA-chi-ga-LOO-pi). It won the Hugo, Nebula, and Locus Awards for 2009.
Advertisement:

The events of the novel take place in 23rd century Thailand. Global Warming has raised the ocean levels to the point where pumps work continuously to keep Bangkok above water. Fossil fuels have all but been exhausted; the main sources of portable energy are hand-wound "kink-springs". Megacorps dominate the world through biotechnology — the crops they sell are engineered to be resistant to diseases both natural and man-made, but they're also sterile so their customers become reliant, with some countries like India and Burma run as virtual puppet states for the "calorie companies". Reckless genetic engineering has led to the destruction of the natural ecosystem. The few plants and animals which have been modified to survive are constantly under threat from the latest viral mutations, as is the entire human race.

Throughout the turmoil, Thailand has managed to stay relatively stable by firmly controlling its borders and maintaining a seed bank safe from the Megacorps' "calorie men". However a power struggle within the Thai government threatens to change all that.