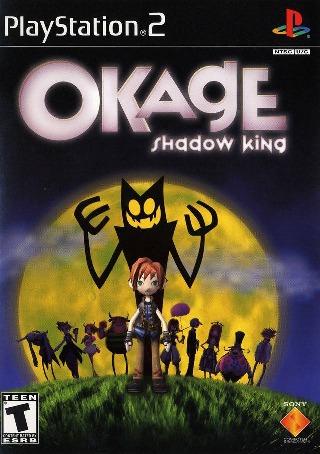 These villagers here, they conspire to infuriate me!
— Stan
Advertisement:

Near the small village of Tenel in the middle of nowhere, there lived a boy named Ari, who was totally ordinary.

He was so ordinary that he blended in with the background. His friends, family, and peers all said that he was the type to 'live in someone's shadow'. However, his "normal" life is suddenly turned on its head when his sister gets cursed by a ghost that causes her to speak completely in Pig-Latin. Not wanting their daughter to live the life of a comic relief girl (seriously, they actually say that), his parents turn to a strange and mysterious bottle that Ari's father found one day, which upon summoning, reveals a spirit and his servant. The spirit in question reveals himself as Lord Stanley Hihat Trinidad XIV... or Stan.

Stan agrees to help for a price: one of the other family members will have to play host to the entity in the bottle and do as he says. After a quick competition to determine who has the best shadow, Ari is chosen to play host for Stan (and practically handed off by his family, poor sod) and Stan makes good on his word, turning the Shadow of Ari's sister pink, just because he never said he wouldn't.

...It gets weirder from there.

Released in 2001 for the Playstation 2, Okage: Shadow King (released in Japan as ボクと魔王 (Boku to Maou), lit. Me and the Devil King) is a Japanese RPG developed by Zener Works. While it had gotten mixed reviews from those that have played it when it first came out, being somewhere between a good game to a mediocre one at best, the game had a cult following in both its native region and in recent years, the west. Many critics and fans often note the game's art and character design is reminiscent of Tim Burton's works (particularly The Nightmare Before Christmas), and the offbeat but interesting story make for a rather unique experience. It was re-released in 2016 as a PS2 classic on the PS4, as a result of its popularity in the east and cult classic status in the west, finally allowing European RPG fans to experience the game for the first time.

There is also currently a fan-made radioplay in development. Progress can be tracked both on the Tumblr page

. Alternatively, a fan zine was created by English fans in 2018

, as well as the game's composers returning to do piano remix concerts throughout Japan starting in 2014, leading to an album version released in 2020.