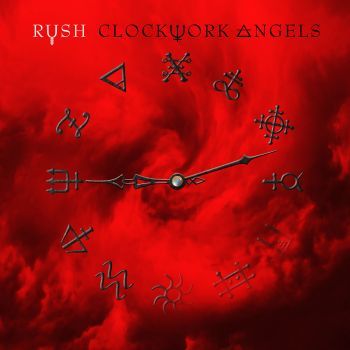 "IT SEEMS LIKE A LIFETIME AGO — which of course it was, all that and more. For a boy, life on the farm was idyllic, but for the young man I became, that very peace and predictability were stifling, unbearable. I had big dreams, and needed a big place to explore them: the whole wide world.
Near our village of Barrel Arbor, the steamliners touched down and travelled on rails along the Winding Pinion River toward Crown City. Watching them pass in the night, how I prayed to get away . . ."
— Caravan liner notes
Advertisement:

Clockwork Angels is the nineteenth and final studio album by Rush, released in 2012. Its basic plot follows the highlights and lowlights taken from the lifetime of an unnamed man living in a Clock Punk and Steampunk inspired alternate universe.

In the first five songs the setting itself is given more focus but is soon overtaken by much more analogous tales with more prominent themes of illusion.

A novelization co-written by Kevin J. Anderson was published in September 2012, accompanied by an audiobook read by drummer Neil Peart. Anderson, a long-time friend of Peart, worked from his storyline for the album and incorporated snippets of Rush lyrics throughout the book. This was joined by a graphic novel in 2014, and a vague Tweet from Anderson that may point to a movie deal.

What do you lack?