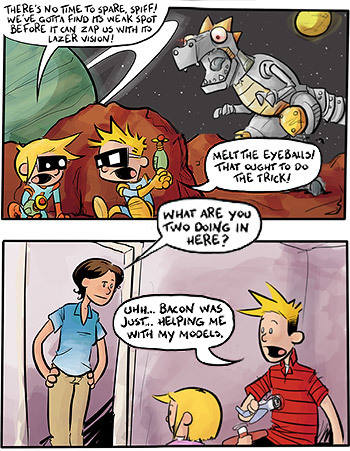 "The only difference between men and boys is the price of their toys."
Advertisement:

Men in general, or a specific man, are called out (often by their wives or lovers, and almost always by a woman) as still behaving like a little boy. The woman in question does not have to be someone who Does Not Like Men, but can see herself as someone who loves and tolerates a man or men despite their supposed immaturity.

Involves an interpretation of some masculine attributes as involving an immature lack of restraint etc.

An example of a gender-related Double Standard, as the reverse occurs less frequently (and/or is difficult to pull off effectively due to the fact that things considered "childish" for men might be considered normal for women).