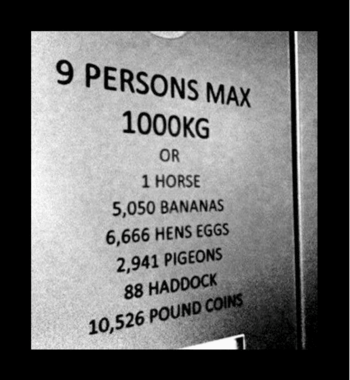 Someone gets inside an elevator, expecting to be the only person there. Then suddenly, dozens of people cram themselves into the tiny car, which may or may not exceed the "maximum capacity" sign displayed on the elevator. You know where this is going by now.

It doesn't even have to be suddenly crammed for this trope to apply. It could even involve the elevator slowly filling up with passengers until it reaches its breaking point, one really heavy passenger that exceeds the capacity, or one extra passenger getting in a totally packed car. Either way, it's no good.

This is not Truth in Television, since elevators are designed with redundant safety measures and this listed capacity is less then their breaking point. In fiction, the outcome is disastrous Elevator Failure at worst. At best, it is merely an Uncomfortable Elevator Moment of a different sort.