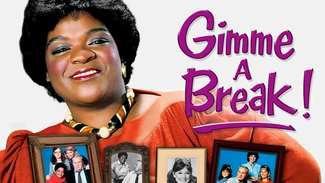 Gimme a Break! is an American sitcom that ran on NBC for six seasons (1981–87), starring Nell Carter as Nell Harper, a once-aspiring singer who became a housekeeper for the Kaniskys: patriarch Carl, the chief of police of the fictional Glenlawn, California, and his daughters Katie, Julie and Samantha (the last of the kids played by a young Lara Jill Miller). Later additions to the cast included Stanley Kanisky (Carl's father), Adelaide "Addy" Wilson (Nell's best friend, played by Telma Hopkins), adopted son Joey (Joey Lawrence) and Nell's mother, Maybelle.

Most of the show's humor came from the clashes of culture (Nell, the Sassy Black Woman from the South vs. straightlaced second-generation Polish Chief Kanisky) and generation (Nell and Carl vs. the girls) in an otherwise standard 80s Dom Com setting. After the death of Dolph Sweet (Carl) after season 4, the series continued for a season with Nell as the sole head of the Kanisky household. For the final season, the show underwent a Retool, with most of the cast (minus the older Kanisky daughters) moving to New York City.