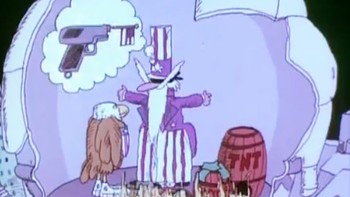 The Further Adventures of Uncle Sam is a 1970 animated short (13 min) by Dale Case and Robert Mitchell.

Uncle Sam is spending his time running a tiny gas station somewhere in the desert Southwest, accompanied by his buddy, a bald eagle. While Sam snoozes in a rocking chair, the eagle takes a walk to the top of a nearby hill. While he's there, a big muscle car pulls up to the gas station. As Sam looks under the hood of the car, two Mooks who look a lot like the Blue Meanies from Yellow Submarine leap out, throw him into a sack, and drive away.

The eagle sees all this happen from his perch and goes off in search of Sam. Eventually the eagle finds Sam being held prisoner at the top of the bad guys's tower. It's not exactly clear just what the bad guys are up to, but they get a new idea: kidnap the Statue of Liberty.

Very much an Unintentional Period Piece, bearing not just a typical look for early '70s independent animation, but also some very unsubtle satire that roots it in the anti-Vietnam War era. Sometimes also called The Further Adventures of Uncle Sam: Part 2—it was under this title that the cartoon got nominated for an Oscar—but that title was a joke, as there was only one cartoon and "Part 2" does not appear in the film's credits.