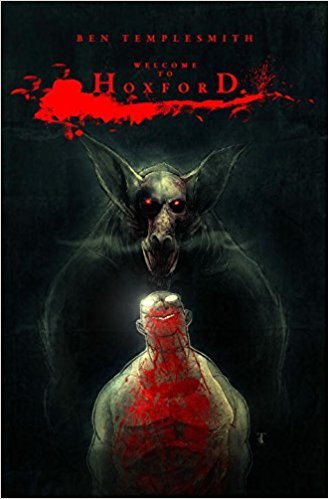 Welcome to Hoxford is a 4-issue miniseries by Ben Templesmith that follows Ray Delgado - an utter psychopath who's considered a major threat even when on his anti-psychotic medications, as he's transferred to the titular Hoxford penitentiary, a private prison owned by the Russian-based Usmanov Corporation along with other irredeemable prisoners.

His psychiatrist, Dr. Jessica Ainley, tries to make sure that her former patient isn't being abused and is given the medications he desperately needs but is constantly rebuffed and treated as a nuisance by Gordon Baker, Hoxford's warden. Her persistence bears fruit after a day or two, when the Warden allows her to meet with Ray, but this confirms her suspicions that Ray is off his meds, as he is now proclaiming himself to be a god. When she goes back to his office to complain about the prison not following protocol, the Warden, rather than kicking her out, locks her in his office with plans to "save her 'til last".

And then things go to hell.

Due to the brief nature of the story, basic plot spoilers will be unmarked.

This inspired a 15-minute fan-film

that, while largely faithful to the source material, centers solely around the first two issues, ending after Ray kills the werewolf entering his cell.

This series contains the following tropes