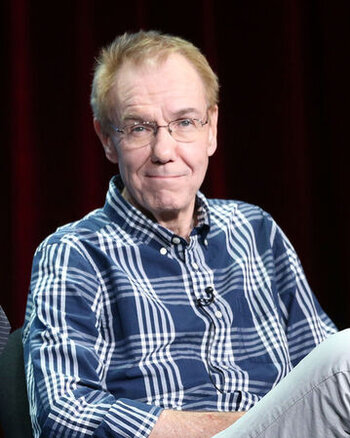 "In his 40 issues on Amazing Spider-Man (#111-149), Conway did more than you'd see in a HUNDRED issues of most other comics. He introduced one of Marvel's biggest characters, The Punisher, he developed Mary Jane Watson into one of the best supporting characters in Marvel Comics history, he introduced the world to the idea of the "Clone Saga" and, most notably of all, he wrote one of the single most famous Spider-Man storylines, the Death of Gwen Stacy, as Peter Parker loses his girlfriend to his nemesis, the Green Goblin."
— Brian Cronin
Advertisement:

Gerard Francis Conway (born September 10, 1952) is an American Comic Book writer who was especially prolific in the 1970s and '80s. He had a hand in the creation of several major characters, including The Punisher, Power Girl, Jason Todd, Firestorm, and many more.

Conway began his career as one of many fans turned comics writers. He wrote his first story at the age of 16 for DC's House of Secrets before going over to Marvel, whose revolution he had already experienced at ground zero, with many of his fan letters published in the pages. Eventually editor Roy Thomas got him to work on a number of characters before Conway earned the daunting and prestigious task of writing for Spider-Man after Stan Lee stepped down. Despite having the proverbial Tough Act to Follow, Conway quickly made his mark, creating characters like Hammerhead, the Punisher (introduced in a Spider-Man story), the Jackal, as well as the Spider-Mobile. Years later he returned to Spider-Man and created another popular minor villain in Tombstone.

He also made the unforgettable break from Stan Lee's shadow as the writer of the The Night Gwen Stacy Died which came out when he was 19 years of age. Conway had the unique distinction of being the same age and generation as Spider-Man and his supporting cast when he started writing the comics, and he brought a new spin on the comics. This story earned Conway hate-mail, to the point that he would claim that he would be afraid of showing his face in public for ten years but in the course of time it was embraced as a landmark story. Conway would go on to contribute to a number of comics titles but no other story quite defined comics history like that one.

Comic-Book series and storylines Conway has worked on include:

Animated series Conway has written for: