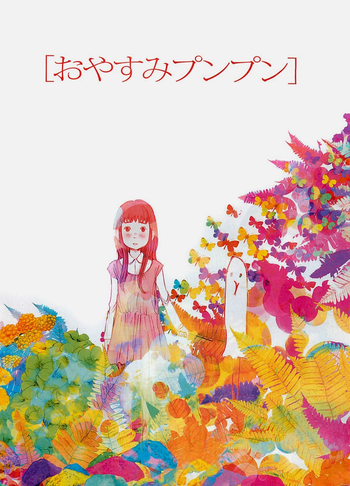 Take a poorly-drawn cartoon bird who never speaks, a broken family, an afro-clad 'god', mentally troubled children, outright insane adults, a large dose of surrealism as well as realism, and a soul-crushing amount of cynicism and you have Goodnight Punpun.

Goodnight Punpun (Oyasumi Punpun) is a supremely bizarre Seinen manga by Inio Asano about the title character, Punpun. Punpun is a young, innocent, and naive child, who, in some kind of strange stylistic choice, is depicted as a simplistic sketch of a bird despite everyone outside of his family looking like a normal human. He has no real dreams, his father is an abusive deadbeat (at least, he appears to be), and his mother is a drunk who regrets having him, but Punpun has one thing: a pretty girl named Aiko whom he fawns over. Well, her, and an afro-clad and slightly useless god he can summon by chanting 'Dear God, dear God, tinkle hoy!'

The story begins as a Slice of Life comedy, following Punpun through his childhood as he deals with his family life, his school life, his social life, and his budding romantic life. While noticeably dark, it also contains a hint of child-like innocence. However, as the series progresses, it develops into an extremely dark Coming of Age story, with all innocence being wiped away. While the humor remains, it takes a backseat to experiences of Punpun, his family, and his acquaintances as they deal with the hardships of adolescence, adulthood, and life in general. The story is split roughly into four arcs: Punpun's life in elementary school, middle school, high school, and as a young adult.

Running concurrently with Punpun's story is a very odd side plot about a cult-like movement trying to (apparently) save the world through "good vibrations", which some of Punpun's classmates end up involved in. It's possibly even more weird and unsettling than anything going on with Punpun, as it's never quite clear if it's real or the mad ramblings of its leader.

The manga ran from 2007 to 2013, initially being serialized in Weekly Young Sunday before switching to Weekly Big Comic Spirits in 2008, where it continued until the end of its run. The series is licensed in Italy and France where other works by Asano were published. VIZ Media released it in English in March 2016 in seven large-format tankobons.