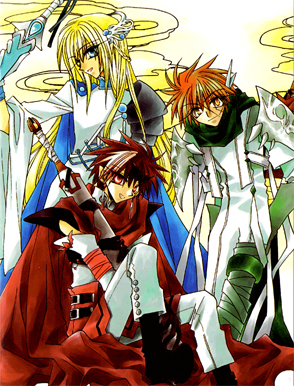 Our intrepid heroes.
Rath: Hey, ugly! We are the slayers of the unholy, the keepers of justice, the guardians of truth!
Thatz: We cannot be defeated! We are the Dragon Knights, scourge of demonkind! And, uh... we're kinda lost.
Advertisement:

A manga series by Mineko Ohkami, Dragon Knights tells the tale of the war between the Dragon tribe led by Lykouleon, who seeks to protect the world, and the Demon tribe led by Nadil, who wants to take it over. To help save the day Lykouleon sends out his best fighters, the Dragon Knights. Traveling to Nadil's dark castle they cut of his head, ending his reign of terror.

And all of this happens before the first chapter.

Now that the heroes have the head of the Demon Lord, they must protect it from everybody else who might seek to bring Nadil Back from the Dead, or simply claim his power as their own. Of course things are never easy, and with evil plots, foul monsters, and shiny distractions around every corner, the Knights will have their hands full trying to keep their victory as such.

The manga was serialized in the shoujo magazine Wings from 1990 to 2007, and compiled into 26 volumes. It was licensed in English by Tokyopop.

Not to be confused with the trope, Dragon Knight.