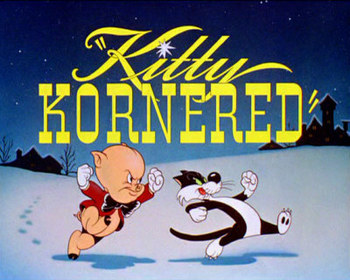 "Kitty Kornered" is a 1946 Looney Tunes short, directed by Bob Clampett and starring Porky Pig with an early Sylvester the Cat featured as a bit player.

The cartoon starts as the neighborhood's cat owners all (literally) throw their cats out for the night. Porky Pig attempts to do the same to his four cats, but they turn on him and throw him out into the snow. Porky bangs on the door, demanding to be let in, but the cats pop out of the door and proclaim in unison, "Milkman, keep those bottles quiet!", and then slam the door in his face which soon leads to a battle between Porky and his cats for the house for the rest of the cartoon.