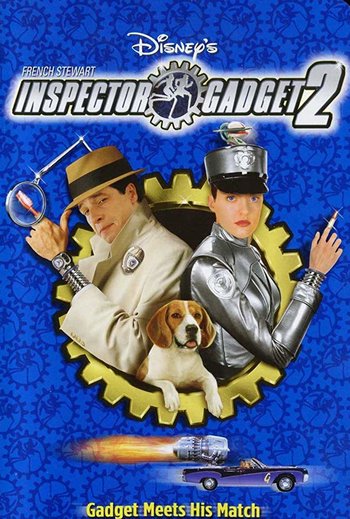 Inspector Gadget 2 is a 2003 Direct to Video sequel to Inspector Gadget (1999) and is both Lighter and Softer and Truer to the Text of the original cartoons. It features French Stewart as Inspector Gadget, Caitlin Wachs as Penny, Elaine Hendrix as Gadget Model 2 ("G2" for short), and Tony Martin as Dr. Claw.

It has been one year since Claw had been imprisoned, and Inspector Gadget is still the dedicated cyborg detective/protector of the city. Unfortunately, his central computer chip has been glitching lately, causing several malfunctions in the field which allowed some of his quarry to escape. This, combined with his overzealous attitude, has the mayor looking to replace him with G2, a fully-autonomous female-type Gadget robot which can do everything the Inspector can do, and more. And if the prospect of losing his job wasn't enough, Claw has escaped his imprisonment and intends to both get his revenge on Gadget and rob the Riverton Federal Reserve using a time-freezing device to rebuild his criminal empire. It's up to Gadget and G2 to stop him, and to do so, they're going to need to work together.