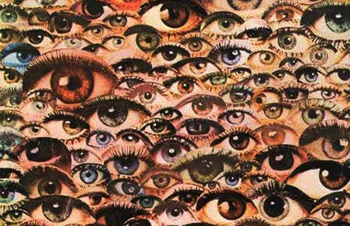 I only have eyes for you...
Advertisement:

It is a stop-motion short in which Frank Mouris tells the story of his rather ordinary life. The most distinctive feature of this eight-minute film is Mouris's use of magazine cutouts for montage. Mouris collected thousands and thousands of magazine images over the years, and in the short they all pass by at lightning speed, appearing and disappearing and moving around the screen as they illustrate Mouris's autobiography. Another distinctive feature is Mouris's use of two separate narration tracks, one being him telling the story of his life in a straightforward manner while the other consists of Mouris rattling off a non-stop list of words that match whatever the images and the other voice are illustrating.

Not to be confused with the feature film, Frank.